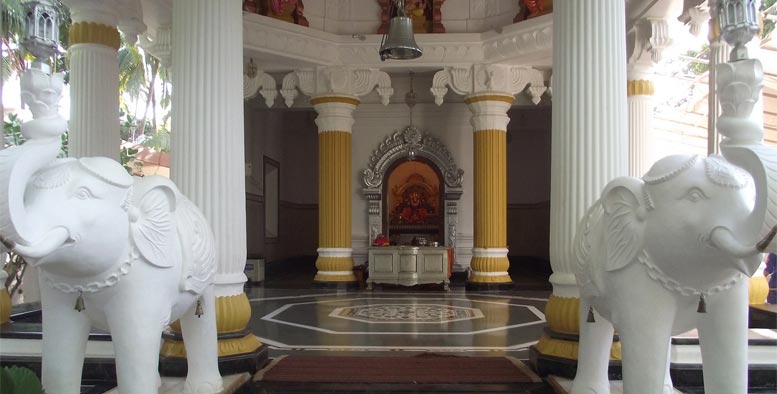 When you visit Malvan, Jay Ganesh Mandir has to be in your ‘must see’ list.

Symbol of faith and devotion, this temple is built by Shri Jayantrao Salgaonkar, an astrologer of repute and creator of very popular almanac ‘Kalnirnay’; in Medha locality of Malvan on ancestral family land of Salgaonkars.

You can observe how the entire construction has been constructed as per the holy principles of temple architecture in India. Shri Jayantrao personally supervised the construction.

The presiding deity in the temple is Lord Ganesha; much revered Elephant God of Maharashtra. See the idol is of pure gold. This main idol in the sanctum sanctorum is in the traditional pose with Riddhi- Siddhi (consorts of Lord) on both sides. Siddhi is holding Dhol (Indian traditional percussion instrument) and sword in her hand while Riddhi has pen and paper in her hands.

Jayantrao Salgaonkar has named this Ganesha as Jay Ganesha so that the Ganesha may bestow ‘Jay’ (success) on his disciples.

You can see the hall that has eight idols of Ganesh carved in the ceiling. You will be blessed with a very comfortable feeling of Lord Ganesh looking benevolently from all the eight directions at his disciple.

The interior of the temple is very rich and has used soothing colours.

Golven Resort insist not to miss the opportunity to watch the speciality of this temple’s architecture can be seen on the early morning of Makar Sankranti (14th or 15th of January). On this day the early sunrays fall directly on the idol and one can see the glittering and shining Ganesha bathed in sunlight.

Also, you can visit the mandir in month of Magh as per Hindu calendar that usually falls in February Month. A five-day annual festival of Ganesh Jayanti is celebrated on 4th Day of Magh. This day is also the anniversary day of the temple.